Judge Beckie Palomo was born in Laredo, Texas to loving and supportive parents, Jose H. and Angelica Ramirez.  She is the second of four daughters raised in a home where faith in God was instilled at an early age together with traditional family values, a strong work ethic and the importance of an education.

On January 1, 2013, Judge Palomo took an oath of office to become the presiding State District Judge of the 341st District Court in Webb County.  She strives for excellence on and off the bench as she presides over lengthy dockets of criminal, civil and family law cases.

Judge Palomo operates a heavy docket of felony criminal cases and has recognized an alarming increase in the number of drug cases by younger offenders.  Judge Palomo is committed to helping those individuals and families suffering from the devastation of addiction to drugs and alcohol.  As part of this commitment, Judge Palomo works within her community to spread awareness about the personal and legal consequences of using drugs and abusing alcohol, and informing the community about the resources and services available to help them achieve sobriety.

Judge Palomo conducts Courts in Schools Program in an effort to educate the students about the criminal justice system, the dangers of alcohol and drugs, and the serious legal consequences of committing a crime. Once a month, a school gymnasium is transformed into an official court proceeding where Judge Palomo presides over sentencing hearings.

Judge Palomo operates the Veterans Treatment Program and works with other specialty court programs dedicated to reducing criminal recidivism through intensive behavior modification and supervision.  She has testified before the Texas Legislature on topics related to the rehabilitation of Veterans coping with the challenging transition from combat to civilian life; many of which suffer with serious issues, including PTSD.

In 2015, Judge Palomo implemented the Color of Justice Program to help educate, encourage and inspire minority students to pursue a career in the law.  Every year over 150 students flood the state and federal courtrooms shadowing lawyers and judges.  Many young minority students now have a better understanding of the justice system and the role of the judiciary, as well as how to prepare for law school, how to study to pass the BAR exam and what to expect when they become members of this prestigious profession.

In 2014, at the request of school administrators, Judge Palomo began having small talks with girls at the local high schools to address certain issues reserved for “between us girls.”  Judge Palomo’s inspiring small talks grew in demand and gave rise to the Girl Empowerment Program.  Today, Judge Palomo is dedicated to empowering young female students to strive for excellence by consistently making decisions that will lead to personal achievement, professional success and ultimately a happy life.

Judge Palomo was appointed by the Chief Justice of the Texas Supreme Court, Nathan Hecht, as 1 of 12 members to the Judicial Advisory Council.  The JAC makes policy recommendations on the better administration of the criminal justice system to the Texas Department of Criminal Justice, TDCJ.

Before taking the bench in 2013, Judge Palomo enjoyed a successful 14-year legal career in Laredo.  She began as a prosecutor at the Webb County District Attorney’s office where she advocated for the rights and safety of crime victims for over eight years.  In 2007, she was appointed the Executive Director of the Community Supervision and Corrections Department for Webb & Zapata Counties and for six years administered the rehabilitation of over 2800 adult criminal offenders on court ordered probation.

Judge Palomo earned a Doctor of Jurisprudence degree from St. Mary’s School of Law and holds a Bachelor of Business Administration degree from the University of Texas at Austin.

Judge Palomo consistently receives accolades from professional, civic and law enforcement groups.  The honors and awards are many, including Paul Harris Fellow, LULAC Tejano Achiever, and Women City Club Hall of Fame. She is a member of the National Association of Women Judges (NAWJ), American Probation and Parole Association (APPA), and the Law Enforcement Action Partnership (LEAP).
​
Judge Palomo’s proudest achievement is raising 5 boys with her husband, Daniel Palomo. 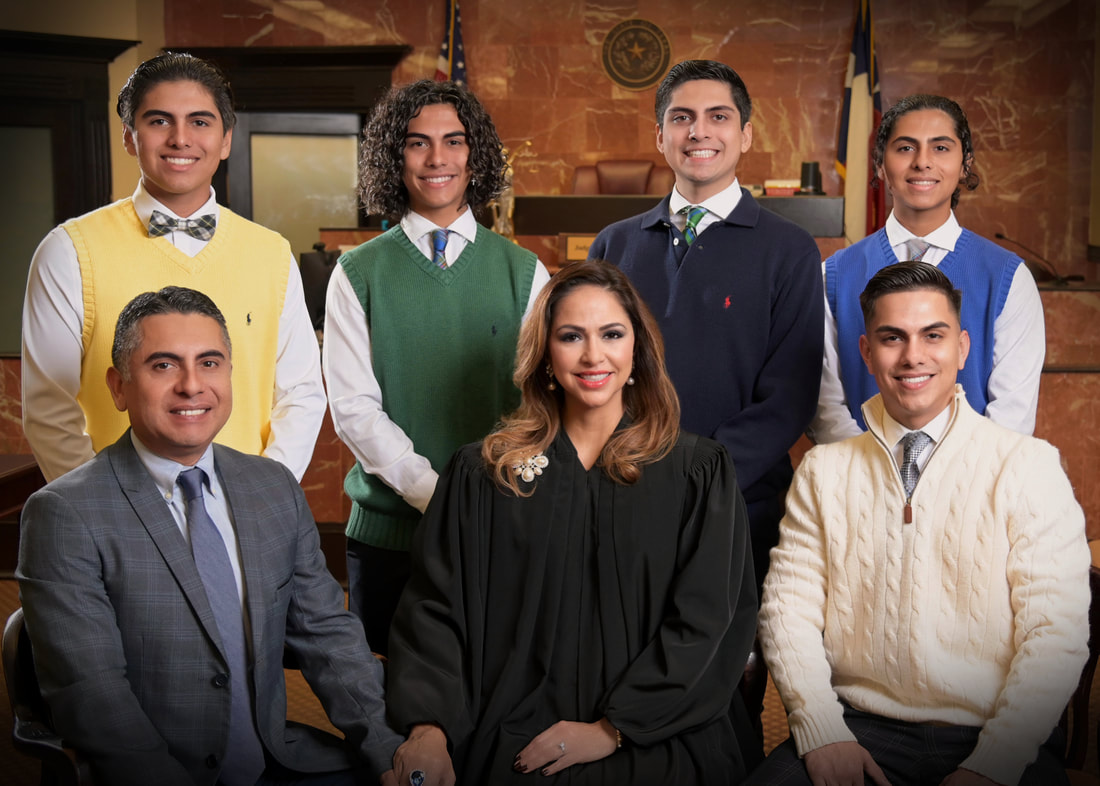